REPRINTED FROM:  The Doctor Who News Page,  posted 4/17/29 by Chuck Foster
Calling all Doctor Who fans with an artistic flair and creative impulse! Ahead of this year’s San Diego Comic-Con, BBC Studios announces the 2019 Doctor Who Fan Art Competition, giving fans an opportunity to see their own work on a Doctor Who t-shirt, with a limited quantity available for purchase at the BBC AMERICA booth at San Diego Comic-Con.

As anticipation for the next series builds, fans can channel their creative energy into an innovative rendition of the TARDIS and their favourite Doctor. Entrants can create anything from a candy mosaic of Tom Baker to a bowtie collage of Matt Smith – the possibilities are endless!

– Two nights accommodation
– Special afternoon tea for two
– Doctor Who Escape Room activity in Reading, United Kingom
– Exclusive private screening of the fan’s favorite Doctor Who episode
– Having their artwork printed on limited-edition Doctor Who merchandise sold at San Diego Comic-Con
– Receiving a goody bag including iconic Doctor Who merchandise valued at approximately £520/$680
All four runners-up will each:

Art Specifications: Each entrant must design their own original piece of Doctor Who fan art in accordance with the following criteria:

– Artwork must feature both the TARDIS and one Doctor *
– The Artwork may also, at the entrant’s discretion, include a background texture, splash of colour or other abstract background design, but must not feature any other design element, including (without limit) any other Doctor, character, companion, monster, robot, prop, location, building or branding element (including third party brand names and logos), whether from the Doctor Who universe or otherwise.
– Artwork can be created in any two-dimensional medium and any color.
– Artwork must not include identifiers such as the entrant’s name, signature, image, likeness or any other identifier, or any reference to Comic-Con.
* Refer to the terms and conditions for more details on the criteria.

Submitting artwork: Each entrant must complete the entry form and upload their artwork in digital format on the Fan Art Competition website in accordance with the following criteria:

– Artwork must be submitted in RGB high res formats (TIFF, JPEG, PNG, or GIF).
– Artwork resolution must be a minimum of 300 dpi.
– Artwork must measure at least 260mm x 260mm when printed at 100% and must not measure more than 381mm x 508mm.
– Each entrant may submit multiple entries, as long as each separate entry consists of a different artwork. Entrants can only win one prize in the competition.

The competition is open to legal residents of the United Kingdom, the fifty United States and the District of Columbia, Canada (excluding Quebec), Australia, and New Zealand who at the time of entry are at least 18 years of age, or the legal age of majority in the jurisdiction in which they reside (whichever is higher). The grand prize winner and four finalists will be revealed at the BBC AMERICA booth during San Diego Comic-Con in July.

Here’s the flyer from the DW office: 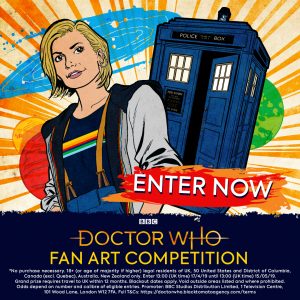