The BBC has confirmed a rumor that after the New Year’s Day special;THERE WILL BE NO NEW EPISODES IN 2019!
Production will done in 2019 for airing in early 2020; here’s the actual report:

THE DOCTOR AND HER FRIENDS WILL LAND AGAIN ON BBC ONE IN 2020
As series 11 came to a close on BBC One tonight (Sunday 9th December) the show announced that series 12 is on its way and will be returning to BBC One in early 2020.  Series 11 marked a brand new era for Doctor Who with Showrunner, Chris Chibnall, taking control of the TARDIS. With Jodie Whittaker as the Thirteenth Doctor, viewers saw the Doctor and her friends travel through space and time on adventures fighting monsters and conquering battles. Series 12 will see Jodie reprise her role as the Doctor and she will once again be joined by Bradley Walsh (Graham), Mandip Gill (Yasmin) and Tosin Cole (Ryan).  So far, from the first eight episodes, series 11 of Doctor Who has averaged a 4-screen consolidated audience of 8.4m.  Jodie’s first episode as the Doctor launched with a consolidated audience of 11 million making it the second biggest drama this year across all channels, while also placing it among the top 10 programmes in 2018 so far across all channels and genres. The episode received 3.7 million requests through BBC iPlayer.Speaking of the return Showrunner Chris Chibnall said “We’re off again! Well we never actually stopped – as Jodie Whittaker’s Doctor and friends have been winning the hearts of families across the nation this autumn, we’ve been busy with a whole new set of action packed adventures for the Thirteenth Doctor. We adore making this show and have been blown away by the response from audiences, so we can’t wait to bring more scares, more monsters and more Bradley Walsh, Mandip Gill and Tosin Cole to BBC One. Brilliant!”  Charlotte Moore, Director of Content added, “We’re delighted that the Doctor and her friends will be returning to thrill audiences in 2020. I know Chris and the whole team are already working on a whole new set of exciting adventures. In the meantime we’ve got a very special episode on New Year’s Day for everyone to enjoy.”

The rumor sprang up a few weeks ago, I saw it on a fan site but saw nothing more than rumor.The BBC gives no special reason for the decision. Jodie Whittaker’s other BBC series “TRUSTME” will go to a second season, but without her.  As it happens, JW visited 10 Downing Street today for a fundraiser for the Starlight Children’sFoundation; the Radio Times article on it blames the delay on the Brexit!https://www.radiotimes.com/news/tv/2018-12-10/doctor-who-jodie-whittaker-downing-street/
Dennis 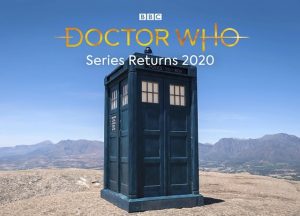